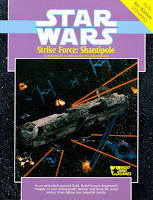 >>> SPOILERS FOLLOW <<<
In my mind, many of the very first adventure modules for Star Wars were in fact the best modules produced for the system. Of course, as the game matured, 'modules' like this were seemingly phased out altogether in favor of collections of shorter adventures or entire 'campaign packs'. But in my campaign, and in my concept of the Star Wars game, these modules were the blueprint to writing my own adventures.
Strike Force Shantipole is no exception. In this adventure, the Characters are assigned to help retrieve a prototype starfighter from a Rebel research outpost in a remote asteroid field. Of course things don't go as planned and before long, the party is infiltrating an Imperial occupied asteroid fortress to recover not only the fighter, but their own stolen starship. In the end, it comes down to a showdown between the Characters in the prototype versus an Imperial blockade.
The adventure includes the standard 'Cut Away' framing format utilized by all early Star Wars modules, but in a story line that is a lot more fast-paced than other contemporary adventures (Tatooine Manhunt, Otherspace, etc.). Characters are quickly thrown into the middle of the plot and its combat, with little time to catch their breath between escaping and sneaking and attacking. This is a double-edged sword, though, as there aren't quite as many opportunities for NPC interaction as there are in other adventures.
That having been said, however, the module does introduce several very interesting things: The first of which is the Verpine, a race of insectoid aliens sympathetic to the rebellion. As allies, they prove to be both useful and a bit comical (if played right)—talkative, a bit naive about human interactions, great tinkerers, etc. The Verpine proved to be one of the more popular alien races created by West End Games, appearing in many subsequent adventures and sourcebooks, and even in the Heir to the Empire novel trilogy.
The second interesting thing introduced in this Module is the Character of Bane Nothos—a ruthless Imperial ship captain that the characters have to deal with in order to make their final escape. In and of himself, Nothos isn't particularly interesting, but this adventure is a great set-up for the Otherspace module, in which Nothos winds up a prisoner of the Rebel Alliance. This continuity between modules wasn't necessarily a common thing, but it was an interesting twist—giving the character's 'history' with a villain, so that they will have a personal reason to hate each other the next time their paths cross.
And finally, you get introduced to Commander Akbar. Yes, THAT Akbar, and yes, he is just a Commander at this point in the timeline. See, he's the Rebel in charge of the Shantipole project. The Characters get a chance to rescue him and his staff, as well as recover his lost fighter. Being able to interact so closely with a Feature character adds a nice flair to the adventure, forming an instant link between it and the movies. In fact, by the end of the Adventure, the Characters will see Akbar promoted to Admiral and will themselves become a part of the 'history' of the Star Wars galaxy by having the (dubious?) distinction of being the 'team of rebels' mentioned in the history of the B-Wing starfighter—the team responsible for saving this design.
As a game master, the whole idea of the characters rubbing elbows with movie characters and actually making galactic history struck a chord with me. And in my own adventures, I strove to make those same kind of connections. More than one Rebel social occasion involved Akbar, or Wedge, or Luke. But for the most part, I kept these interactions of the social variety. As this module showed, it is good to work WITH feature characters but not alongside them—afterall, the PCs are the heroes, you don't want them to get overshadowed in their own stories.
As stated before, this is pretty much a straight-out action adventure, with a little bit of sneaking thrown in. Therefore, it may be a bit shallower in plot than some of the other adventures, but that doesn't stop it from being interesting. This limited plot and the aforementioned limited NPC interaction are really my only criticisms of the module—well, that and the fact it set the stage for a recurring theme in an inordinate number of adventures: i.e. the old "You lose your ship" gambit. Seeing how it is integral to the plot for the players to do so, you may have to be very heavy-handed in taking away the character's ship. Thankfully, the Character's get a chance to get their ship back—unlike so many other adventures where it begins with the player's ship crashing.
Overall? Shantipole is a good adventure to run in the early portion of any Star Wars 'Rebel' campaign.
Posted by rologutwein at 2:09 PM