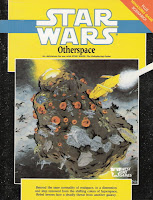 >>> MAY CONTAIN SPOILERS <<<
I am an unabashed fan of the movie Aliens. In fact, it remains at the top of my top-ten favorite movies of all time. Right above Star Wars and Empire Strikes back. Blasphemy, you say! This is a Star Warsish forum! But hey, that's just the way things are.
Why do I bring up Aliens? Well, because the Otherspace series has a lot in common with it. As I discussed in my previous post, that's one of the greatest things about the Star Wars setting. You can include an 'Alienesque' adventure and it can still feel like Star Wars.
To set the tone for the adventure to follow, the whole thing kicks off with the characters being stranded in a strange place—their ship in need of repairs. This is a classic horror technique—remove the characters from any chance of outside help and place them in a position where they HAVE to go into the spooky places they'd rather not, or they'll never be able to leave.
The pacing continues in line with the best horror movies. You start slow, with hints and glimpses of the horrors you might be facing. In this case, the players have to investigate another ship—the one they were trying to find in the first place. Something horrible has happened to the crew, but at this point, you only get bits and pieces and unsettling clues.
Once you're onboard the Alien's ship (in this case, the aliens are an arachnid race known as the Charon), the characters begin to encounter more and more of them, and of their disgusting bio-technology—slowly coming to the realization that the entire ship is basically 'undead' (there is one memorable encounter where the characters have to cross a room that is  basically the ship's 'stomach'—complete with all kinds of gooey and oozey challenges).
And through it all, the characters must continue to search for the parts to fix their disabled ship. Though it isn't explicitly pointed out in the adventure, I always liked to present the Charon as 'testing' the heroes through all of this, looking for the strengths and weaknesses of their particular 'strain' of life. I felt it added an extra-creepy atmosphere to make the Charon observing just as much as they are attacking—leaving the players to wonder why they don't just swarm them (and giving a plausible reason why the Charon don't do exactly that).
Adding flavor to this mix of horror are the NPCs, in the form of escaped prisoners from a Rebel prison transport. These include a crafty Imperial Moff, trying to 'cut a deal' with the aliens, an Imperial ship captain with a personal grudge against the players, an assassin droid, an insane space-pirate and finally, a femme fatale—in fact, the same femme fatale from Tatooine Manhunt. Some of these villains remain villains. Others are would-be allies. It was this aspect of the adventure that really captured my imagination and lead to my trying to keep villains alive for more than one adventure. It is fun to have recurring villains—it gives the PCs and the NPCs a 'history' and a real reason for personal animosity.
The Charon themselves captured my imagination as a wonderful alien menace, even if I did wind up adapting them just a bit from how they were presented. Physically, they were tough and creepy looking. They had strange and gross bio-tech abilities and could even create hybrid 'zombie' type constructs. They were part of a 'hive' mentality, meaning that they would and could sacrifice themselves in appalling numbers if they had to. They were implacable foes, determined to destroy or 'adapt' all life forms but their own. And finally, they had this strange link to the Dark Side of the force, through the black obelisk they worshipped. What's not to like?
You throw all of these things into the mix, build slowly to a climax battle versus the big-bad leader of the bugs and end with a breakneck escape—and the lingering threat that the Charon are still there, waiting. All in all, a superb adventure that takes star wars into the realm of horror. The 'Cut Away' framing devices were perfect for this as well, setting the mood for the players, even if their characters were blissfully unaware.
My only criticisms of this adventure are as follows: First of all, the scope of the Alien threat seems a bit weak if you take the module strictly at face value. A 300m long ship... houses an entire race who wiped out an entire galaxy. Hmmm. Wimpy galaxy. In order to pose any kind of a threat to the Star Wars galaxy, the Charon would have to have thousands of ships and billions of warriors.
Secondly, the number of encounters on the Charon mothership could be a bit excessive—especially if the players are thorough in exploring each level. It could seriously mess with the pacing of the story to have to play out each and every one of these encounters. I would recommend crafting a few different routes, hitting the high-points of the encounters, then confining the characters to whichever route they choose. It would make IC sense, too, in that the Charon could be channeling them down a particular route to see how they perform. Especially in the case of horror, it is sometimes okay to 'force' the players into something. Taking away a bit of control of their own destiny can be unsettling, which is just the point.
All in all, I loved Otherspace, and I was so inspired by Otherspace II: Invasion, that I wrote my own sequel to the series—Otherspace III (original name, I know, but probably better then Otherspaces or Otherspace-cubed). I'll get around to reviewing the rest some other time.
Posted by rologutwein at 8:49 AM