Review: Battle for the Golden Sun 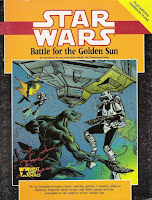 >>> SPOILERS FOLLOW <<<
This was one of the first modules to come out for the Star Wars D6 System. In fact, it might have been the first (I'm not sure, I know it was the second one I ever bought, right after Tatooine Manhunt). As I recall (though I can't find any evidence online) it even won some gaming awards for 'best adventure' that year.
The plot of the adventure was essentially a rescue mission. The characters are sent to find a lost Alliance diplomat after his assistant returns from the last mission, suffering from severe mental trauma. Upon arriving (crashing) on the planet in question (the ocean world of Sedria), the party becomes involved in a civil war between native tribes. It isn't long before they realize that one tribe is in league with the Imperial Forces also exploring the planet—searching for the source of a strange power kept by the natives: the titular "Golden Sun". The action ranges from roleplaying with the natives to infiltrating the Imperial aquatic base to a final all out battle beneath the sea.
Overall, the adventure was enjoyable. It was a good mix of roleplay and action and in a very unique environment. It introduced a lot of really interesting stuff, too—from the very cool looking Imperial Sea-Troopers and their turtle-like AT-AT "Swimmer" to the Golden Sun itself, which turned out to be a colony/hive-mind of force-sensitive coral polyps. The story had a very heroic feel to it as well, complete with a Romeo and Juliet type romance between a native prince of the 'good' tribe and the warlord daughter of the 'bad' tribe.
The climax of the story involves helping the Golden Sun escape from its confines in the native city, and it is at this point where the coral actually chooses a 'champion' among the character party (either a force sensitive or a person with a high perception). I thought that was a nice touch, and in fact in my campaign that is when one of the characters (Arianne) actually first became a Force user.
Despite all of this, I never warmed to this adventure as much as I did to a lot of others. I think that some of that may have been an unfair comparison between Golden Sun and its contemporary Tatooine Manhunt. Some of it may have been due to the aquatic setting (still not a particularly popular setting in most RPGs). But there were other, more specific criticisms as well.
First of all, there was the cliche (often repeated in other adventures) of a crash landing on the planet. In many cases, such a thing is necessary in order to keep the players on a particular world long enough for them to be involved in the story there. But in this case, the party already had a mission to accomplish and didn't need the added incentive to stay. Overall, this is a nitpicky criticism, but when this same trick is repeated in every other adventure, you get sensitive to it.
Also, the middle section of the story is rather dependent upon the players being in a specific place in time to overhear the chief of the 'bad natives' conferring with the Imperial commander. This 'evidence' is to be used later as a tool to rally the natives to the cause of good, but I know I had to really railroad my characters to make sure they picked up on this connection. I also was never quite sure why the natives would believe this evidence once it was presented.
As mentioned before, the Romance between native prince and his lady-love was a nice touch. But I almost wish that there had been more of a way to include the characters in this—to tie them more directly into the plot. Since the natives were of a very non-humanoid persuasion (looking like giant seals with arms) it really wasn't prudent to have a character-native romance happen (unless you have some really kinky players), but at times, it felt as though the plot revolved a bit too much around the prince and not enough around the characters. I have since re-run this adventure in a completely different campaign, altering the natives to be an aquatic humanoid race and I enjoyed it a bit more. But then, I guess I have a prejudice towards humanoid races. What a bastard I am.
As you can see, these criticisms really don't amount to much of a negative, so I still recommend this adventure to any group. It just didn't hit me as one of my favorites.
Posted by rologutwein at 12:16 PM