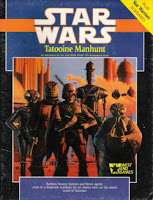 >>> SPOILERS FOLLOW IF YOU HAVEN'T PLAYED THE MODULE <<<
Tatooine Manhunt was the first module to come out for the Star Wars RPG, back in 1988. For me, it set the tone for the entire game from then on. It set the bar for what I considered a 'good' adventure, and it set it pretty high. I'll admit that part of my fondness for this adventures stems from my own sentimentality (my friend Sharon will vouch for the fact that I'm a sentimental goob). I 'grew up' with this adventure, reading it in high school. It was the first adventure I ever ran at a game day. It was the adventure that kicked off the Vermillion campaign. So, yeah. I'm biased. But just because I'm biased doesn't mean the module doesn't have its merits.
The first of these merits was the classic 'Cut Away' sequences that are the hallmark of the original Star Wars adventures. This was a novel idea where the GM acts out scenes ('Cuts away to them') with the villains or other NPCs in the adventure—scenes that the player character's themselves don't have any in-character knowledge of, but which set the mood for the upcoming episode. With this device, you not only capture the cinematic feel of the movies, you also get a chance to develop the personalities of NPCs who otherwise might not get much interaction with the PCs (other than being shot and killed). In the case of this adventure, one of the main villains, the Imperial Captain Parlan, doesn't ever directly confront the PCs, and yet you still get a look at his scheming and his eventual downfall (Darth Vader: "Apology accepted, Captain Parlan."
The second merit was the usage of iconic character archetypes—without using the actual feature characters they were based upon. Jodo Kast, the Mandalorian bounty hunter, makes a great poor-man's-Boba-Fett, offering challenge to beginning level characters without completely overshadowing them (as Fett would have). Likewise, IG-72 was a good IG-88 stand-in. But not all of the characters were direct rip-offs, others just /looked/ the part, Like Jungen and Shrike—actually good guys, but they resembled Bossk and Zuckuss. There were Gamorreans and Jawas and Tusken raiders, a space-pirate with a vibro-blade hand, a Hammerhead Crime Boss, a Snaggletooth henchman with a penchant for explosives, a femme-fatale bounty hunter, a grizzled desert scout and ultimately a long-lost hero of the Old Republic. Wow. Even though they weren't feature characters, they all just captured the 'feel' of the movies- and in particular the feel of the first Star Wars.
Setting the adventure on Tatooine further cemented the Star Wars feel. It was like getting to run around in the 'back yard' of the original trilogy—set right after Luke and Han blasted out of Mos Eisley. You get to brush up against Jabba's organization (though the Big Guy doesn't make a direct appearance). You get to battle womp-rats, face-down a Bantha stampede and maybe even tangle with  Krayt Dragon. But most of all, you got to visit the Mos Eisley Cantina! Complete with the band! It got me so psyched up that I even threw in my own touches—like a chance to actually purchase Luke Skywalker's landspeeder (you know, the one he sold to get off Tatooine?).
The plot is another great aspect to this adventure—finding a long-lost Clone Wars era hero, Admiral Adar Tallon, who evidently faked his death when the Empire came to power. The characters have to follow a series of clues to track the man down and convince him to join the Alliance, all the while dodging bounty hunters out to capture Tallon for the Empire. There are numerous classic set pieces that, again, capture the Star Wars feel: The gunfight in the Cantina, the magnetically sealed death-trap in the water silo, the (afore mentioned) Bantha stampede, the showdown at Fort Tusken, and the final harrowing escape from the ISD Relentless and its TIE fighters.
There are plenty of quirky and original ideas in the adventure, too, most notably the introduction of the 'Dim-U', a sect of Bantha-Worshipping kooks, preaching the 'Wisdom of the Bantha' on street corners and living in a desert commune called Oasis. I had a lot of fun with them. This module, and West End Game's previous and subsequent products were really part of the beginning of the 'Expanded Universe', and these entirely new and creative ideas really add a lot to the setting as a whole.
The only real criticism I have of Tatooine Manhunt is that there may be just a few too many combats in it as written. For a beginning party, these combats, strung back-to-back, might prove to be too much of a challenge. Star Wars isn't supposed to be lethal, so GMs may have to tone some of this down.
All in all, I think its plain to see that I enjoyed this adventure. Tatooine Manhunt holds a special place in my overly-sentimental heart, and I highly recommend it to anyone running a star wars campaign.
Posted by rologutwein at 7:45 AM