Review: Death In the Undercity 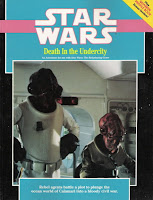 As the Star Wars RPG system progressed, West End Games slowly phased out the 'module' format adventures in favor of spine-bound booklets. Death in the Undercity was one of the first of these new format books. The plot of the adventure was a rather unique one—the characters are sent to the planet Calamari to investigate troubles in the deep-sea mining operations there. Once on-planet, they discover a plot by Imperial 'destabilization' agents to turn the planet's Quarren population (the miners) versus the Mon Calamari. This is unique because it marks one of the few times that the characters are operating entirely on a 'friendly' planet, completely in control of the Rebel Alliance.
I enjoyed this twist on the typical espionage mission into Imperial space. It turned the characters more into investigators than spys—foreshadowing the time when the New Republic would again have to police its own internal problems. It also meant that the characters were somewhat constrained in the tactics they could employ. You can't be heavy-handed and brutish with your own people (well, at least not if you want to succeed). Thus, a lot of what might have otherwise been combat must instead be solved by roleplay and negotiation.
That isn't to say there isn't a lot of action in the adventure, however. Its a Star Wars module—and rule number one is that is has to have lots of action. The mission starts off with a deadly sabotage attempt, proceeds through a bar-room brawl and back alley shootouts and ends with a showdown in the dangerous, undersea mining complex itself. Plenty of opportunities for the more combat-oriented players to blow off all the pent-up energy of having to act civil among the civilians.
There was also a bit of comic relief in the adventure—in the form of a group of mining droids with incredibly simplistic logic systems. They were portrayed as very eager, curious, excitable and even 'heroic'—in that they could actually be 'recruited' to battle the evil empire (once you explained to them what an 'evil empire' was). One of these droids so endeared himself to the vermillion crew that they took him onboard as one of the crew.
I have very few criticisms of the adventure from the standpoint of story or execution. My problems are of a more nitpicky nature—beginning with the team of Imperial Destabilization Agents. These guys were supposedly humans that were 'cosmetically altered' to look like Mon Calamari. To me, this stretches believability a little. Humans and Mon Cals are VERY different, and to think that these guys could fool Mon Cals and Quarren for any length of time with giant fish-man suits (okay, so they were medical implants or something, bus still...) just doesn't sit right—to say nothing of the fact that human physiology wouldn't allow them to breathe underwater or even resist the pressure of water like a real Mon Cal. A better way to handle this would be to have the destabilization agents actually BE Mon Calamari 'radicals' who were partially brainwashed and partially bribed (with visions of ruling the planet, etc.) This would add a whole other layer of social and political complexity to the mission rather than a 'Scooby Doo' revealing of the bad guys in the monster suit.
My second nitpick with the adventure has to do with the status of Mon Calamari itself. It is a planet in open Rebellion to the Empire. It is a major provider of arms to the Alliance. And yet for some reason, the Empire doesn't send a fleet there to crush it. In retrospect, it just doesn't make sense to me—but I'll go into that a bit deeper on another post.
In any case, Death in the Undercity continued the high standards of the earlier modules into a new format, and I recommend it as an interesting alternative to the standard Imperial spy missions.
Posted by rologutwein at 2:36 PM