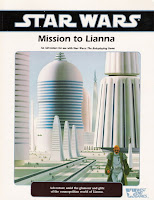 This is another of what I term the 'second generation' of Star Wars adventure modules—perfect-bound booklets instead of the old saddle-stitched variety. More than most of its contemporaries, however, Mission to Lianna pointed to a trend that would become the norm in West End Game products—providing not just an adventure, but a rather complete outline of an entire planet in an almost 'sandbox' style presentation (meaning there were lots of open ends that GMs and players could explore).
The plot of Mission to Lianna is a nice variation on the typical 'action-adventure' style of most modules, playing out (in theory) more like an espionage thriller than a balls-to-the-walls shoot-em-up/chase scenario. The Mission the players are sent on is to travel to the Industrial world of Lianna and make contact with Rebel agents there who have a 'situation' that needs handling. Upon arrival in the system, the party is witness to suspicious Imperial naval activity—some kind of experiment that gives some very strange readings on their ship's sensors. After a brief exploration of the city and several clandestine meetings with Rebel contacts and agents, the party finds themselves having to plan and execute the theft of experimental cloaking technology from a corporate skyrise. Escaping with the goods (with or without pursuit, depending on how the heist went), the character's find themselves in the midst of a lavish party—attended by corporate and Imperial types alike. Here, they must bluff their way through the guests and find a means of escape back to their ship and off the planet.
The whole espionage angle to Mission to Lianna is one of my most favorite aspects—providing yet another bit of variety to any campaign (at least in my opinion). It is quite possible for cautious characters to get through the adventure with very little combat at all. That doesn't mean a lack of challenge, however—there are security systems to overcome, turbolifts to re-wire, NPCs to con, sheer walls to climb, patrols to sneak past, etc.. It's a true test of a party's ability to do things other than fight. Unfortunately, that can be a REAL test for parties who have not built up those non-combat skills in previous adventures. In fact, I would reserve this mission for more experienced PCs, rather then novices with straight out of chargen stats (unless the players are REALLY clever).
The 'sandbox' nature of this module is another of its strengths. Yes, there is a story line and a mission to accomplish, but there is also a nicely described world to explore, with interesting little nooks and crannies players may wish to explore before or even after the mission (perhaps on a return visit sometime in the future). But with this free-form aspect, there is also the spectre of players going 'off the reservation' on some tangent or other. This adds a lot of dynamism to the adventure, but can also cause problems for GMs if their players aren't particularly task-oriented. Another MAJOR difficulty that this free-form can cause is the the possibility that the party could entirely skip the last episode of the adventure—the swanky imperial party hosted by the local industrial magnate. From a story angle, missing the party has no real impact—but from the angle of roleplay opportunity, it would be a damn shame if they did. In my first playthrough of this, I REALLY had to finagle things to get the players to the party, and in retrospect, it felt kind of forced. But in the second playthrough, things went very smoothly in this regard. In any case, GMs should pay special attention to this area, and do some thinking ahead based upon how they think their players will react. Of course, if you're one of those 'let the chips fall where they may' kind of GMs, then it's no big concern.
By far, though, the most interesting and well done part of Mission to Lianna are its NPCs and how their various personalities and motivations weave through the adventure. And unlike many other adventures, the players will likely get a chance to interact with all of them—even the villains—in a non-combat arena. Such meetings are always a plus in my book. It makes things more personal, gives the villains (and allies) a 'face' and presence they wouldn't have if restricted only to cutaways. In this adventure, you've got Lady Valles Santhe, the seemingly loyal Imperial Industrialist who is secretly working against the New Order. You have Philip Santhe, her scheming, but not too bright son who is trying to use his imperial contacts (and the cloaking device) to gain control of the corporation. There there is Kashan Santhe, Philip's idealistic grandson, a rebel sympathizer working against both his father (whom he dislikes) and his grandmother (whom he respects, but doesn't realize is secretly on his side). The Villain of the piece is lord Rodin Verpalion, an Imperial government official on Lianna to ensure the success of the cloaking experiment. There are literally dozens of others, however, from enthusiastic rebel agents to secretaries to underworld figures to an amazing variety of guests at the Santhe party. And the players will have a chance to interact with just about ALL of them. Good times.
On a personal note, the first two times I ran this adventure, it had two very different outcomes. I've detailed it in other posts, so I won't go into it here. But it does go to show just how different approaches and playing styles can dramatically affect the outcome of even a story-based adventure. This is, in my opinion, another example of how story adventures, if done well, can be just as dynamic as any fully 'sandbox' setting. Or maybe that's just me. In any case, I highly recommend this adventure—in fact, I can't think of any real negatives to it, unless you PREFER less cerebral and roleplay oriented stuff.
Posted by rologutwein at 6:39 AM