"Disney is the Devil!" 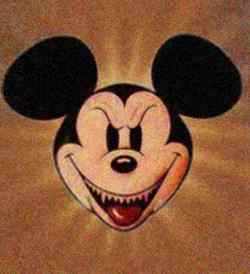 This seems to be a common thread among Star Wars fans- at least the ones that make comments on the Star Wars Facebook page. I discovered this recently when checking out a post from Star Wars congratulating the Clone Wars for winning a daytime emmy.

The response to this seemed to boil down to: "Yeah! Congratulations, now you're cancelled!"

And indeed, it seems that Disney is canceling production of the show. This should come as no surprise for a couple reasons:

1) The show is currently running on a network owned by a rival company—a competitor of Disney.

2) The clone wars has run five seasons, covering a lot of 'in-universe' time. The stories have been steadily building up Anakin's transformation from idealistic youth to embittered and disillusioned adult. In my opinion, you simply can NOT continue building and building and never have the pay off. And the 'pay off' in this instance is Anakin's fall to the dark side. This will indeed put an 'end' to the Clone Wars, and it is only right that it should.

And yet people seem to be quite upset about this, despite the 'writing on the wall'. Reasons are varied, but the most common themes I have noticed are these:

• Disney is 'money grubbing'
• Disney runs all its franchises into the ground
• Clone Wars should have continued for years because it was good!
• Now we'll never have 'closure', because its cancelled!

I want to begin by answering the last two. As I stated before, the Clone Wars takes place during a very finite amount of time. The Clone Wars lasted 4-5 years. The show has already run five seasons, covering a lot of time and ground in the process. Unless the series wants to pull a 'MASH' and go on for longer than the actual war lasted, it NEEDS to end, for the sake of the story.

As far as getting 'closure' goes, Disney has stated they will continue the story—though they have not yet said exactly how. I imagine they'll do something like a series of movies or perhaps even release a movie in the theatre- like they did when they launched the show. It is even possible (though no one has stated so) that some characters may continue into the new series they have planned, set during the 'Rebellion' era. In short, it sounds like they're going to give us closure, just not in a series entitled 'The Clone Wars'.

Now, on to the claim that Disney is 'money grubbing'. Well… duh! They're a corporation, they're in the business to make money. They can make more money if they bring the show 'in-house' and show it on their own network. There are probably contracts with Cartoon Network in place that we know nothing about—perhaps things that would prevent Disney from simply 'moving' Clone Wars to a different network as a series. So yes, Disney is in business to make money- you can't really fault them for that, unless their business practices WERE designed to destroy their properties for short term gain.

Now, if you were talking about the Disney of the late 80's/early 90s, there may have been some truth to this claim. There was a period there (the Eisner years) where it felt like Disney focused a bit too much on 'efficiency' and not enough on product. Their successful films felt 'diluted' by the slew of low-budget tie-ins that were churned out to go with them.

In my opinion, this changed with the introduction of Pixar and its eventual merging/takeover of Disney. They are currently experiencing a 'renaissance' of sorts. They are producing some truly awesome movies with stories that are NOT formulaic and don't feel 'cheap'. In short, it feels like Disney got its soul back- at least to me. Go on, watch the first ten minutes of Up. If you are not moved, you're not human.

This all leads me up to my last 'rebuttal' of the complaints against Disney: They run their franchises into the ground. A lot of folks seem to think Disney is going to 'destroy' Star Wars. In response to this, I say: Look at Marvel Comics. When Disney acquired the rights to the Marvel Universe, people were squawking the same arguments. That Disney is somehow going to 'disneyfy' everything and ruin it. That did not happen. In fact, quite the opposite happened. Marvel films are some of the hotted properties on the planet right now. Why? Because Disney seems to realize an important thing: People LIKE things for REASONS. If you CHANGE things beyond recognition, people STOP LIKING them.

In short, Disney is Money Grubbing. So they are NOT meddling with proven formulas just for the sake of 'disneyfying' them. They want to make money, so they are giving people what they want. It is a novel idea, really. Considering the butcher job so many studios do when they get ahold of a project. It seems that most hollywood studios feel they have to 'put their mark' on something creatively, to change it and make it 'theirs'. In the process, they usually destroy the reason that people liked the thing in the first place. So far, Disney hasn't done this. I'm willing to give them the benefit of the doubt.

And finally, I'd just like to say this… if Disney DIDN'T take over Star Wars, odds are we would NOT have seen any new movies. Seemed to me that Lucas was 'done' with his creation- perhaps even before he made the prequels. As it stands now, it looks like we have a brand new TV series (at least one) and FIVE brand new movies in the pipeline. And until I see some actual work from Disney, I am willing to give reserve judgement and hope that these things will be something people will want to watch. They have a pretty good track record so far.

But then, fans react viscerally to just about everything. If you didn't care, you wouldn't comment anyway. So take all of this for what its worth- just the opinion of another fan who wants the Star Wars franchise to be great again—to set a standard of awesomeness for a whole new generation of fans like it did with mine. I honestly believe Disney can do this, so please, how about a little 'hope', or at the very least reserve the bile until the company has actually produced something for us to look at and criticize.
Posted by rologutwein at 6:13 AM